Following are the Discrete Structure notes: The Introduction

The notes on the Discrete Structure are based on UGC NET Computer Science and Application syllabus.

a set is a collection of objects, which are called the ‘elements’ of the set

The following format is used to indicate a set

The following properties are useful:

The power set of a set is the set of all subsets of the set.

Cardinality of a power set

Or, in English, the size of the power set is equal to 2n where n is the number of elements in the set.

The union of the sets A and B is the set that contains the elements that are either in A or in B, or in both.

the set containing elements that in both A and B

two sets are disjoint if their intersection is the empty set (i.e. they have no elements in common)

The difference of A and B, A – B, is the set containing elements in A but not in B.

Keep in mind: the property of duality (‘dual’) means that you can swap ∩ and ∪, and swap ∅ and U. This helps you to remember less, which is good.

See your textbook or course notes for this stuff; it’s hard to write in HTML.

two sets are disjoint if their intersection is the empty set (i.e. they have no elements in common)

(i.e. any 2 sets have no overlapping elements)

(i.e. all of the sets combine to produce the whole, but none of the sets have the same elements)

We can also think of these as xy co-ordinate pairs, and they can be sketched on a number plane as such.

A binary relation R from set x to y (written as xRyxRy or R(x,y)R(x,y)) is a subset of the Cartesian product x×yx×y. If the ordered pair of G is reversed, the relation also changes.

Generally an n-ary relation R between sets A1,…, and AnA1,…, and An is a subset of the n-ary product A1×⋯×AnA1×⋯×An. The minimum cardinality of a relation R is Zero and maximum is n2n2 in this case.

A binary relation R on a single set A is a subset of A×AA×A.

For two distinct sets, A and B, having cardinalities m and n respectively, the maximum cardinality of a relation R from A to B is mn.

A relation can be represented using a directed graph. 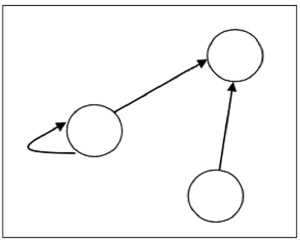 Takeaways from that definition’s mess:

has X as the domain and Y as the codomain (the codomain is the set containing all of the y values that could occur).

Floor: the largest integer that is less than or equal to x. Written as ⌊x⌋.

Ceiling: the smallest integer that is greater than or equal to x. Written as ⌈x⌉.

More or less, the set of all the y values that actually occur.

A function ƒ is one-to-one (or injective) if and only if for each y in the codomain there is only one (i.e. one or none at all) ordered pair (x, y) in ƒ.

i.e., a function is onto if its range equals its codomain.

A function is a bijection if it is both one-to-one and onto.

Composition of a function and its inverse

Pigeonhole principle is widely applicable to many fields. It is fairly applied in computer science. It is quite useful in computer programming and in various algorithms. Pigeonhole principle plays a vital role in mathematical analysis also. It is used in different problems related to arithmetic, geometry, economics, finance etc. This principle is very commonly used in practical problems related to probability theory and statistics.

Not only in subjects related to mathematics and science, pigeonhole principle is applied to many other fields, such as:  in sports in order to choose the team members.

The extensions of pigeonhole principle are applied to many areas related to arts, like: geology, mining, geography etc.

There are many examples which use pigeonhole principle. Few of the examples are given below:

1) Golf: Let us suppose that there are 8 balls and 7 holes. If balls are to be put in different holes, then at least one hole must have more than one ball.

2) Handshake: If a number of people does handshake with one another, then according to pigeonhole principle, there must exist two people who shake hanks with same people.

3) Birthday: Let us consider that n people are chosen at random from a group of people. Then, in order to find the probability of having same birthday, pigeonhole principle is applied. It says that at least two people will have same birthday.

4) Marble picking: Consider that we have a mixture of different color marbles in a jar. In order to find at least how many marbles will be picked before two same color marbles are guaranteed. It can be calculated using pigeonhole principle assuming one pigeonhole per color will be assumed.

In combinatorics (combinatorial mathematics), the inclusion–exclusion principle is a counting technique which generalizes the familiar method of obtaining the number of elements in the union of two finite sets; symbolically expressed as

where A and B are two finite sets and |S| indicates the cardinality of a set S (which may be considered as the number of elements of the set, if the set is finite). The formula expresses the fact that the sum of the sizes of the two sets may be too large since some elements may be counted twice. The double-counted elements are those in the intersection of the two sets and the count is corrected by subtracting the size of the intersection.

The principle is more clearly seen in the case of three sets, which for the sets A, B and C is given by

This formula can be verified by counting how many times each region in the Venn diagramfigure is included in the right-hand side of the formula. In this case, when removing the contributions of over-counted elements, the number of elements in the mutual intersection of the three sets has been subtracted too often, so must be added back in to get the correct total.

For more details Read This.

Definition:
A relation R is an equivalence relation if and only if it is reflexive, symmetric and transitive.

Let m and n be integers and let d be a positive integer. The notation

R is a partial order relation. It is reflexive, anti-symmetric, and transitive

The Rule of Sum and Rule of Product are used to decompose difficult counting problems into simple problems.

A combination is selection of some given elements in which order does not matter.

Probability theory was invented in the 17th century by two French mathematicians, Blaise Pascal and Pierre de Fermat, who were dealing with mathematical problems regarding of chance.

Before proceeding to details of probability, let us get the concept of some definitions.

Event − Any subset of a sample space is called an event. After tossing a coin, getting Head on the top is an event.

The word “probability” means the chance of occurrence of a particular event. The best we can say is how likely they are to happen, using the idea of probability.

The conditional probability of an event B is the probability that the event will occur given an event A has already occurred. This is written as P(B|A).

Not limited to real-valued random variables like the correlation coefficient, MI is more general and determines how similar the joint distribution p(X,Y) is to the products of factored marginal distribution p(X)p(Y). MI is the expected value of the pointwise mutual information (PMI).

For more information Read this.